Project Sulfuric Acid Alkylation Performance Improvement
Location US
Scope Of Work Process Evaluation, Troubleshooting
Project Summary The refinery operates an Exxon® designed sulfuric acid alkylation unit to produce high octane alkylate. The reactor mixers were experiencing high vibrations, causing the speed of the mixers to be reduced in order to reduce the vibrations. The lower speed has impacted reactor conditions and also caused alkylate quality to suffer.
In support of the refinery, Norton Engineering conducted an engineering evaluation of the current reactor and mixers and made recommendations for improvements that could be implemented so that the mixing performance and alkylate quality could be improved.
Share

Chief tasks in execution of the project included:

NEC sent two of our Alkylation experts to the client’s refinery to inspect and evaluate their current alkylation system.  The unit had started vibrating when the impellers were operating at their high speed so the operators were forced to switch the impellers to their low speed setting.  After operating at the low speed setting for a time the vibration began to return.  The client contacted NEC to find a cause and solution to the vibration issues quickly so that improvements could be made during an upcoming shutdown in the coming weeks. 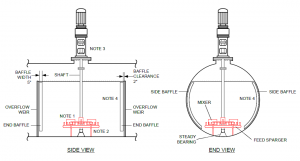 Our engineers arrived on sight after reviewing design drawings of the alkylation unit and were able to sit down with the client and provide them with the causes of the vibration and concrete solutions that could be implemented to improve performance in the short window available.  One of the NEC employees actually designed the mixing system for the unit when he worked for Exxon in the early 1980’s and was easily able to identify the cause of the vibration as resonance between the impeller and the feed injection system.  Having designed the impeller in question he was able to recommend replacing the impeller with a different design to limit resonance with the feed injectors.

The feed injection system had also become fouled causing corrosion and tube failure in the injection system.  NEC was able to suggest a new injector system taking the number of different feed injectors from over 120 to just over 30 by increasing the size of each individual injector decreasing the risk of fouling, the cost of replacing the system, while still maintaining high product quality.

Ask us how Norton can put our expertise to work for you! Contact us today